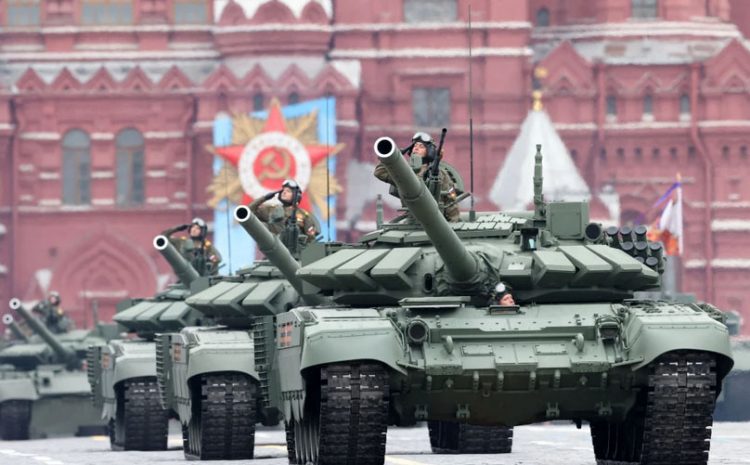 Russia has finally launched its feared “ full-scale invasion ” of Ukraine after Vladimir Putin announced a “special military operation” in a televised address to his citizens a week ago.

Explosions were reported soon after on the outskirts of the cities of Kharkiv, Kramatorsk, Mariupol, as well as in the capital Kyiv, causing many Ukrainians to queue at supermarkets, ATMs and gas stations, in preparation to withstand a possible siege. or to try to escape.

Ukrainian President Volodymyr Zelensky said his government would impose martial law on all territories of the state and urged citizens to stay home as much as possible.

Meanwhile, the country’s airports were temporarily closed and secured against possible landings by Russian planes, while Russia closed its own airspace around the border to civilian access for the next four months.

According to Zelensky, 137 Ukrainian civilians and soldiers were killed on the first day of fighting and another 316 wounded as he appealed to the international community to do more to help. He vowed to stay in Kiev when Russian missile strikes began targeting the city in the early hours of Friday morning.

Tensions in Eastern Europe have risen since December, when Russia stationed an estimated 130,000 troops along its western border and then another 30,000 in Belarus, though it consistently denied that it intended to carry out incursions into Ukraine.

US Secretary of State Antony Blinken, French President Emmanuel Macron, German Chancellor Olaf Scholz and UK Foreign Secretary Liz Truss conducted frantic diplomatic negotiations in hopes of avert calamity, but in the end it seems they came to nothing.

The situation sharply escalated on Monday when Putin moved to officially recognize pro-Russian breakaway regions of the Donetsk People’s Republic (DPR) and Lugansk People’s Republic (LPR) as independent states, allowing him to mobilize military personnel to those areas. in preparation for the next attack, under the guise that he was extending protection to his allies.

The international community criticized the decision, with the United Nations Security Council expressing “great concern”, in addition to the US suggesting, apparently correctly, that the action was a pretext for a large-scale military attack. .

Vassily Nebenzia, the Russian ambassador to the UN, insisted there would be no “new bloodbath” in eastern Ukraine, but warned the West to “think twice” before making matters worse.

The sanctions revealed so far by the West, including measures taken to prevent Russian banks and wealthy plutocrats from doing business abroad and blocking regulatory approval for the lucrative Nord Stream 2 pipeline, have been criticized as inadequate, and top Russian officials like Dmitry Medvedev and Sergey Lavrov have reacted with a shrug of the shoulders and a smile.

The return of war to the region comes eight years after Russia annexed the Crimean peninsula and sparked clashes in the industrial heartland of Donbas , where a low-level conflict that has already killed more than 14,000 people continues to reverberate across Kyiv. and pro-Russian separatists.

In anticipation of all-out war that the West had hoped would never come, the North Atlantic military alliance previously sent additional ships and fighter jets to deployments in neighboring eastern states like Poland and Lithuania, now bracing for an influx. of refugees as many Ukrainians will flee their homeland for safety reasons, while the US and UK withdrew families of diplomats from Ukraine as a precaution, and some airlines stopped flying to Kyiv.

The UK and US have already provided Ukraine with some additional forces. The former sent anti-tank weapons to the country and stationed 350 soldiers in Poland, in addition to having another 1,000 ready to mobilize. They are now expected to provide more weapons and resources.

But such gestures are likely to be of little comfort to Kyiv, given the significant gap in military strength between the two fighters.

While Ukraine has fewer than 250,000 soldiers and is looking to add another 130,000 to its ranks, Russia has almost a million soldiers at its disposal. It also has much more sophisticated and abundant military hardware.

Speaking about the disparity between the two militaries, Vadym Prystaiko, Ukraine’s ambassador to the UK, stated that it is unfortunate that his country is not part of NATO .

“We are not part of this family and we face the largest army in Europe alone,” he lamented. 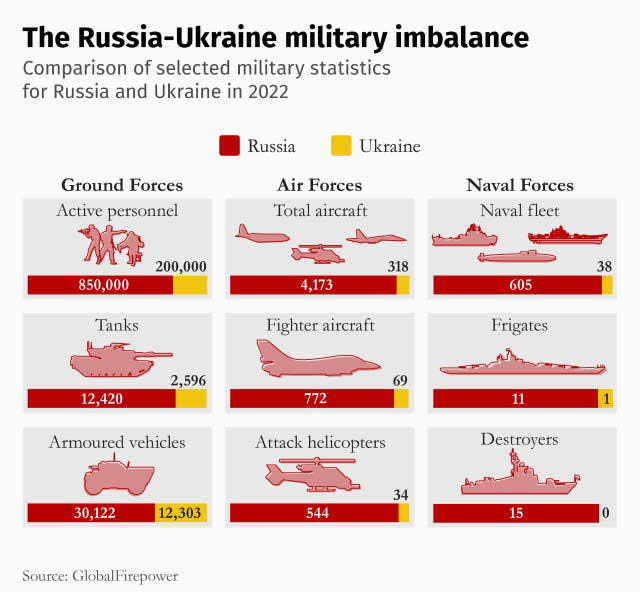 Putin is believed to see the current situation as the first step in correcting what he perceives as NATO encroachment on countries like Ukraine that were previously ruled by the Soviet Union before its collapse in 1989.

With polls showing that a large majority of Ukrainians would like their country to become a member of the military alliance, Moscow wants the West to promise that this will never happen, something NATO has categorically ruled out.

Putin laid out his own stance on Ukraine and its relationship with Russia in a 5,000-word essay published last summer.

Titled “On the historical unity of Russians and Ukrainians,” the treaty was “one step away from being a declaration of war,” according to Anders Aslund, a senior member of the Stockholm Free World Forum.

The Russian president reiterated his claim that Russians and Ukrainians are “one people”, and suggested that his country had been “the victim of a robbery” when Ukraine gained its independence from the USSR.

In another part of the text, he made more open threats to Kyiv. “I am sure that the true sovereignty of Ukraine is possible only in partnership with Russia,” Putin wrote.

In a matter of months, he sent tens of thousands of soldiers to the border.

Kremlin spokesman Dmitry Peskov repeatedly denied that Russia intended to invade, responding that Western weapons being delivered to Ukraine, the country’s own military exercises, and flights of NATO aircraft.

But, perhaps as a prelude to the storm to come, more than a dozen Ukrainian government websites were hacked in January.

The country’s foreign ministry initially said it was too early to say who was to blame, but added that “there is a long history of Russian cyber attacks against Ukraine.”

The hackers left a sinister message on the websites they took down. “Ukrainian! All your personal data was uploaded to the public network. All data on the computer is destroyed, it is impossible to restore it, ”he said.

“All information about you has been made public, be afraid and expect the worst. This is for your past, present, and future.”